Great Wall Toys introduced a 4 channel, hobby grade RC helicopter that fits right at the price point of the popular Syma S107g toy helis. Oversea’s sites like BangGood, MyRCMart, Miracle-Mart, and Helipal are good places to purchase them from. While in the States Nitroplanes have it for $31. Best of all, replacement parts can be found as low as a dollar or cheaper from sites such as BangGood and FocalPrice. The follow are my impression of it. 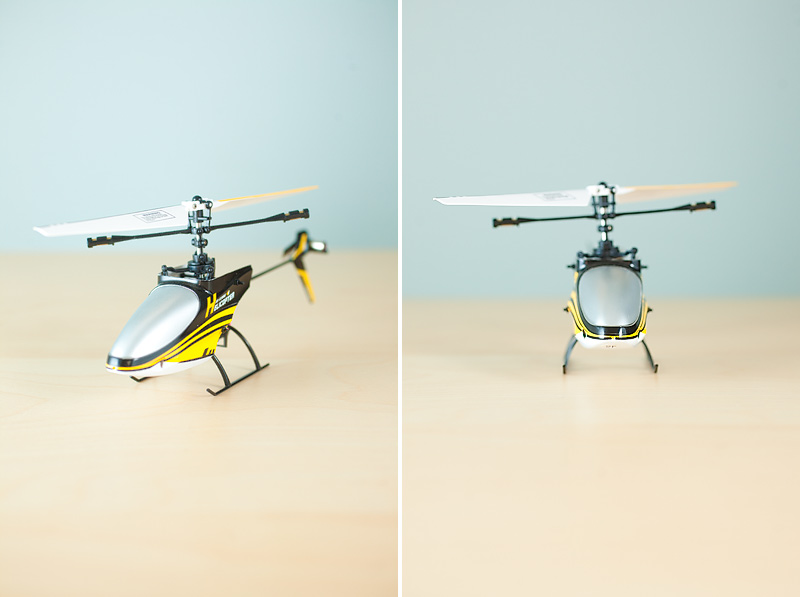 The black canopy Xieda 9958 three-quarter and straight on view

At first glance, the Xieda 9958 looks similar to the popular E-Flite Blade mSR. Upon closer inspection, anybody who are familiar with other micro helis in the market will notice that the 9958 is comprised of a mixture of design between the Blade mCX and Blade mSR helicopter. That said, Great Wall’s did make some design changes. For example, using a weighted flybar instead of the paddled flybar as seen in the mSR. All the control balls are slightly larger than those found on the Blade helis. 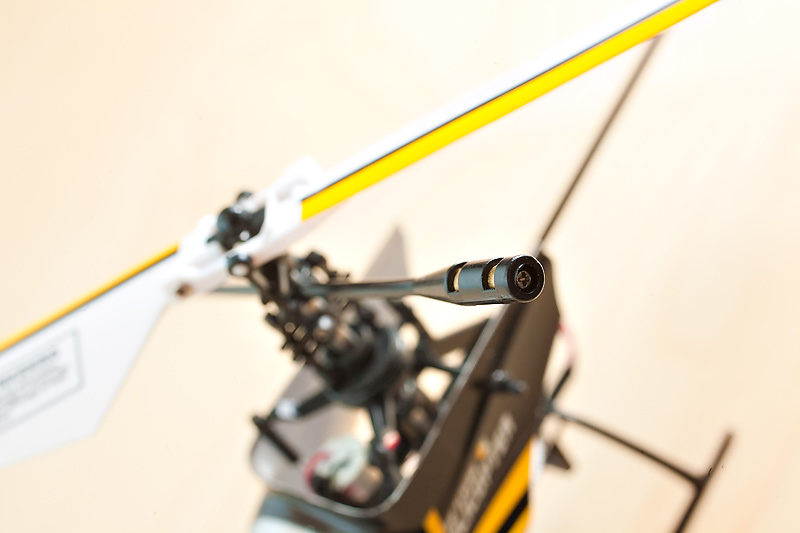 The blade design of the 9958 is similar to the lower blades of the mCX and mCX2 coaxial helicopters. 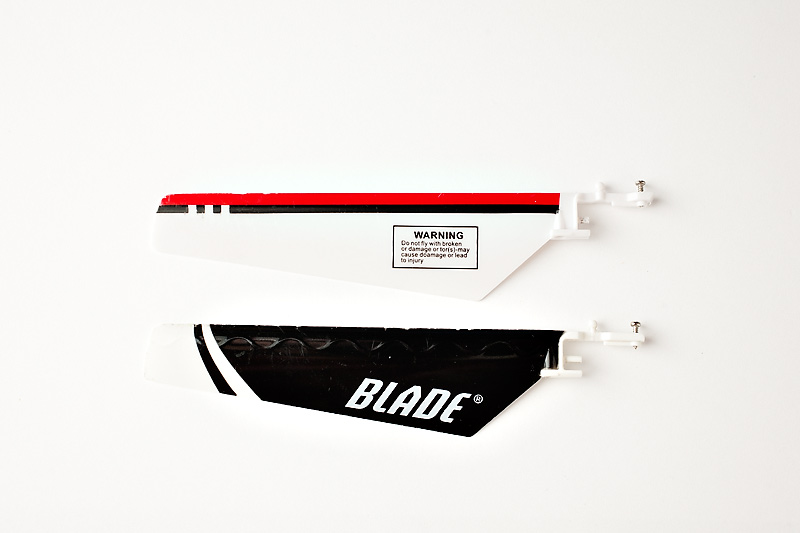 Comparision to the lower mCX2 blade

The plastic used is stiffer on the 9958 than on the E-Flite lineup. Where the blade pivot goes into the rotor head is more narrow than on the 9958. So to fit the Blade coaxial heli’s blade on the 9958, you need to either purchase the E-Flite mCX/mCX2/Force RC lower rotor head. Alternatively, if you have some spare 9958 linkages, you can cut the ends off of one link to yield spacers. With these spacers, you can fit the E-Flite blades onto the 9958’s rotor head. All slop that was there before will be eliminated. 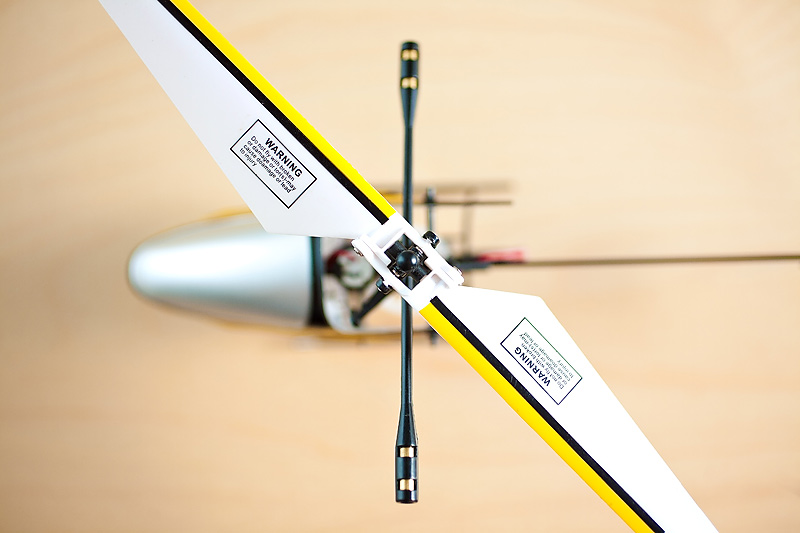 Regarding the stock 9958 blades, I found that the blades’ linkage balls are prone to breaking off during crashes and whenever you need to remove the linkages. I suggest you take great care and have a bunch of replacement blades on hand. To help mitigate broken balls due to removal of the linkages, simply don’t ever remove the linkage from the blade end. Remove them from the flybar end whenever you need to take off the head. The balls on the flybars are much more resilient. Below is a photo of the blade linkage ball I am referring to. A popular upgrade to increase durability is to replace the 9958 blades with the lower blades from the mCX, mCX2 and Force RC coaxial helicopter. At $2.99, it’s worth it for the enhance durability. especially if you have just broken your last pair of stock blades and can’t wait the two weeks it would take to order spare parts from an overseas vendor. 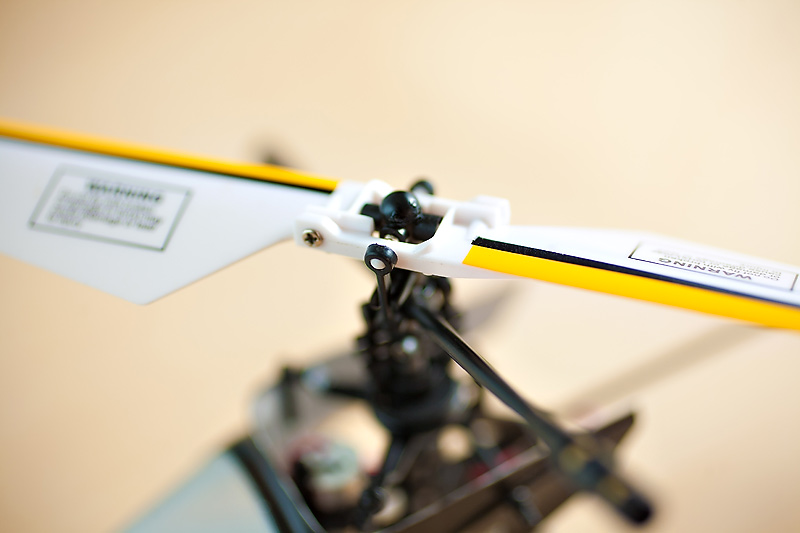 View of the blade link ball prone to breakage 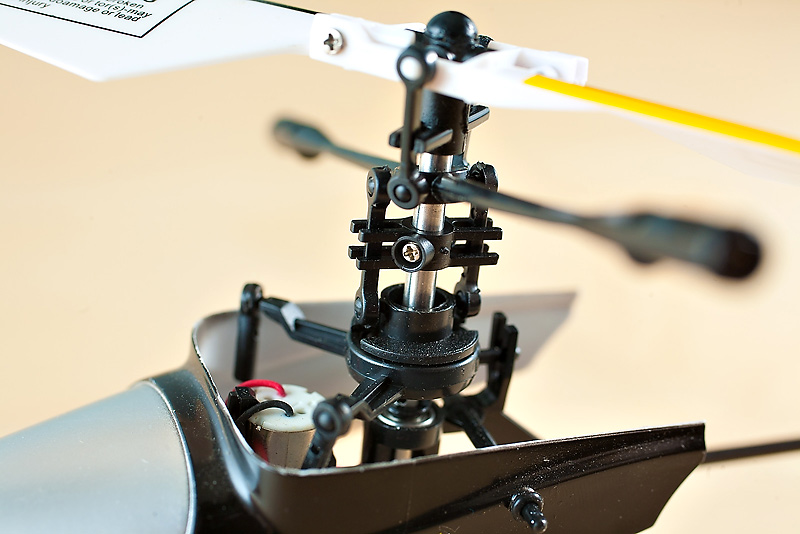 The implementation of these design changes, as well as differences in the 5-in-1 board’s servo mixes and remote controller’s sensitivity, results in a totally different overall flight characteristics when compared with the Blade mSR. 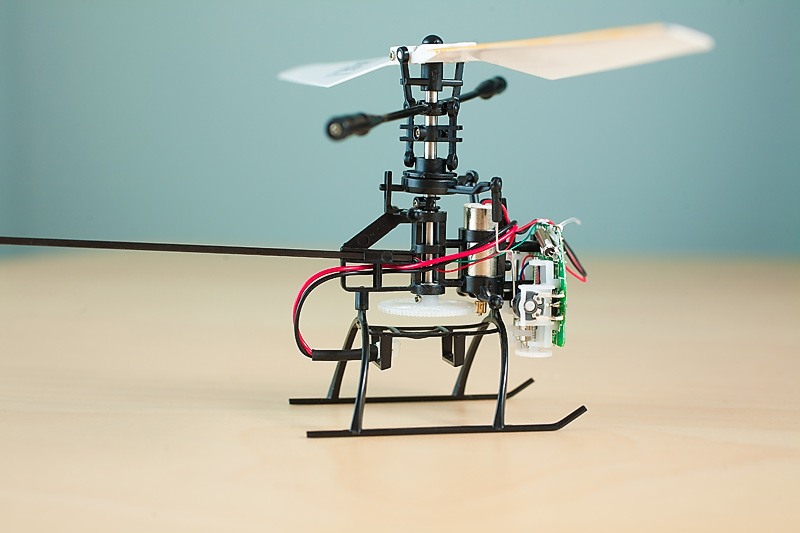 Here’s a frontal view of the 9958’s 5-in-1 controller board. I suggest you inspect and resolder the antenna wire through the board. Many reports of the antenna wire falling off and the heli flying away as a result. So that’s one of the first thing I would double check on a new 9958. The glue you see there is too flexible and doesn’t adhere properly to the antenna wire. Update: The newer RX boards has the antenna properly soldered through the PCB board. It makes the chances of losing the antenna much less likely. But please visually inspect for antenna if you are going to fly it outside. Because the 9958 does not have automatic cut off in the event of signal lost.

Here’s a look at the 9958 tail. The boom is square like the Solo Pro and both are 1.7mm square carbon fiber tube. The length of the carbon fiber boom itself is shorter than the Solo Pro, but together with the plastic motor holder, they both are very similar in length. The tail fin simply clips on and I find that it likes to come off during crashes. So when flying outdoors and retrieving your heli after a crash, make a note to check that the tail fin hasn’t fallen off. I actually prefer to fly without my tail fin, to change the balance of the heli a bit. Something to note that is a departure from how mSR and Solo Pro is the use of insulated multi-stranded thin gauge wires instead of enamel coated motor wires. Sometimes during severe tail impacts, the motor holder can move forward and the exposed graphite can nick the wire’s insulation. The exposed copper wire can cause a short that resets the 5-in-1. I have seen talks of the 9958 tail motor being weaker than the Solo Pro or mSR. With the mSR being the strongest of the three. I haven’t quantified this myself, but I do notice that the 9958’s tail motor is shorter than the Solo Pro (15.05mm) and the mSR (15.10mm). Tail hold seems fine regardless of this fact so I don’t think a stronger motor is necessary. (Update 04/29/2012: I have noticed some 9958 where on throttle punches, or giving full throttle from the ground results in the tail not being able to hold it’s head. I don’t know the cause of it as some 9958 doesn’t have this problem.)All companies previously mentioned uses tail motor of the same diameter, so it’s easy to interchange between them with little or no modding to the tail motor holder so if you feel the need to experiment. I do want to commend GW Toys on the neat wire routing as shown in the photo below. There’s a groove that routes the wires neatly. The motor holder has a tab at the end to prevent the motor cap from popping off in the event of a hard hit to the motor shaft. This was a big issue with the mSR early on and still is to a certain extend on the later model mSR. The new Blade mSR X finally did something about the problem by building a cage around the motor like the Solo Pro and Bravo SX. The latest revision of the Xieda 9958 has a tail motor holder that holds the motor in place even better. 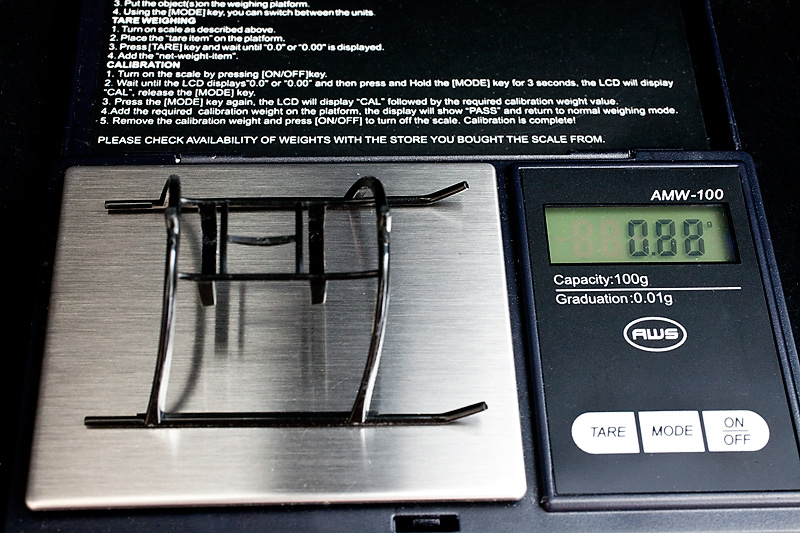 I find the battery skid’s durability to be ok. They weigh .88g and are very slightly heavier than the mSR’s skids, which weighs in at .63g. The 9958 battery skids likes to come off after crashes. But it’s easy to put it back into place so it’s not a big deal. You can remedy this with a dab of glue, let dry before friction fitting it back into place. Flight wise, I find the 9958 is quick and nimble. But it likes to slide or drift during bank turns. You can help cancel out this tendency by pulling back on the elevator as you begin to turn. It tightens up the turn quite a bit. This sliding tendency makes it harder to fly fast indoors. Outside, it’s ability to point the nose down allow for some wind fighting ability and fast forward flight. With the open space, it is a blast to fly. Turns and flight are very smooth. However, like all micro helis of this size, any wind or breeze will put your ability to control the heli to the test. This definitely adds an extra dimension of fun. In open space, the range is quite nice with the stock transmitter. Keep in mind that the stock TX does not have an antenna wire running through the plastic stub. So I advise caution when using it around residential areas where there may be heavy sources of signals that may diminish the range of the Xieda 9958 considerably. There has been more than one report of 9958 flying up up and away. Some people joke, saying it flew back home to China. 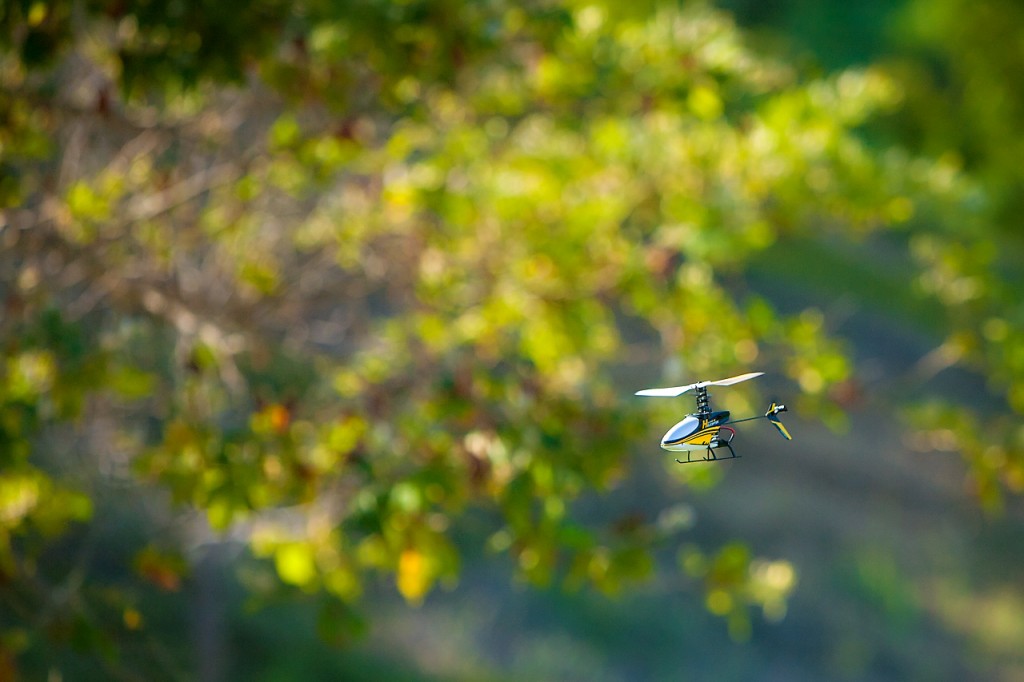 The Xieda 9958 is definitely a worth while fixed pitch mico heli for the price. It’s at the price point of most coaxial toy heli but performs more like hobby grade micro helis before it. I definitely think it’s worth giving the 9958 a try if you are curious about this class of helis. For those that are definitely want an upgrade path to larger, full size helis, then the mSR with it’s DSM2 compatible technology may be the wiser investment. (Update 04/28/2012: Horizon Hobby has discontinued the mSR so finding one might be difficult.) Also, don’t count the Solo Pro out either, as it has a very unique flying characteristics that many heli pilot enjoy. Put 9958 into the search bar above and you will find all the upgrades, mods and updated info since this article was written. Have fun and let me know what you guys think in the comment section below.